In this article, we will discuss about the uses and gratification theory. With the help of this theory, you will be able to know the ways media is used by you. We have also discussed history and criticism of this theory in detail.

Uses and gratification theory and why people use media

Uses and gratification theory makes you aware of how people use media for their needs and gratification. In other words, it is the theory that tells you about what people do with the media, instead of what media does to the people. 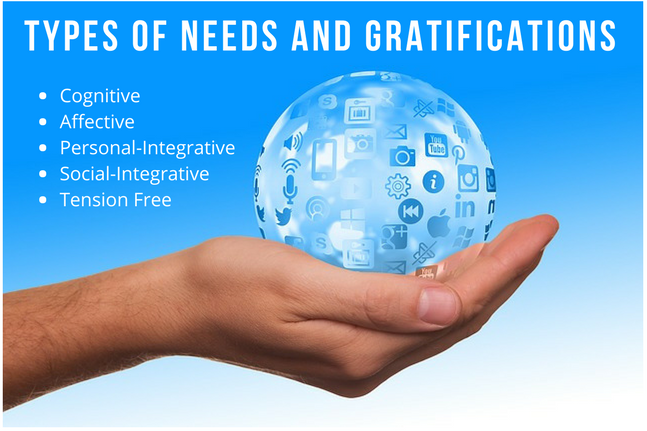 The uses and gratification theory opposes the magic bullet theory that states that audience is passive. This theory helps you learn that people use media to fulfill some of their specific needs. This approach has an audience-centered approach. People have five types of needs and gratification. Let’s discuss the same below:

Fulfilling the cognitive needs is a must for a person to lead a successful life. Knowledge seekers use the media to gain knowledge about their interests. However, not all the people yearn for the same. Quiz programs, news and informative channels are most useful for you to gain knowledge. You can also find lots of people using the internet to gain proper knowledge about something. It is the method that you can use anytime and anywhere to gain knowledge.

All of us have emotional needs. You love to laugh and cry in tense situations. Your heart gets filled with different emotions according to the situation. These are called Affective Needs. All the emotions, pleasures and various moods come under the affective needs of the people.

The most common media you use to satisfy your Affective need is television. For example, when you watch sad television scenes, you may find yourself crying. In some cases, after completing your favourite film or television serial, you find yourself mocking the act from a scene. This shows that the film or serial has affected you and you are enjoying it.

Personal integrative need is something which you can relate with the self-esteem. It is the need in which you use media to gain reputation. You watch advertisements on the different media platforms. These ads make you aware of latest lifestyle trends. This way you improve your lifestyle with the use of media.

Human beings are social birds. You like to socialise with people such as family, friends and relatives. Earlier, people used to gather at different events to fulfil their need of socialising. However, things are not the same now. Now, you have various social media platforms such as Facebook, WhatsApp and many other channels for socialising. With the help of these social media platforms, you fulfil your social integrative needs.

You may often start watching your favourite channel on TV if you feel tense. Or you may take to another source of media in the same situation. You do it to escape from the situation you are in. However, not all the people enjoy watching TV or using other media in a tense situation. Everyone has their way of relaxing, and people use what suits them more.

Criticism of uses and gratification theory

In the previous section, we gave you the introduction of the uses and gratification theory. Here, let’s discuss weaknesses of this approach.

According to the researcher Len Ang, it is a highly individualistic theory. It gives you the idea of the psychology of an individual from the personal media use. You will not find the social context of the media use in this theory. It also ignores the fact that some media use may not have any concern with the pursuit of gratification.

The researcher Len Ang further explains that this theory does not give much attention to the media content. Another criticism of it is that it tells you only why people use media. It also does not make you aware of the meanings people get out of their media use.

It says media are only functional to people

Uses and gratification theory gives you the view that media are always functional to the people. This way it offers a justification for the way medias are organized.

Advantages of uses and gratification theory

In this section, we will explain the advantages of the theory we have discussed so far.

It tells you what audience can do with the media

Uses and gratification theory makes you aware of what you do with the media. It can tell you how and why you can use a certain media. For example, you learn that you can watch a comedy show if you are sad. Or you can watch other things for the entertainment purpose. 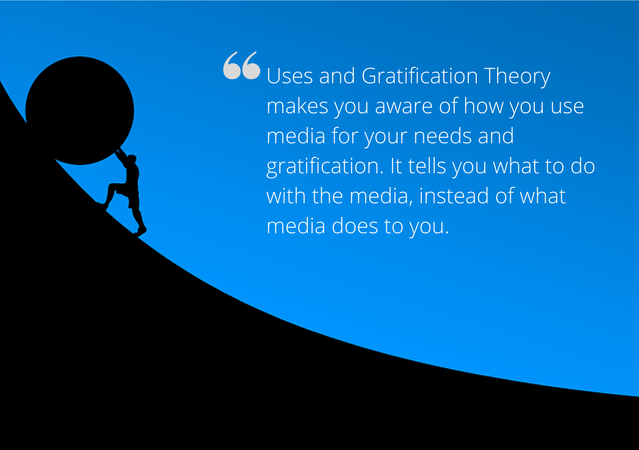 It helps you identify your preferences

If you feel like laughing watching a comedy show, your friends may not do the same. It can also happen that you may want to use the media for certain reasons. For example, to gain knowledge or for entertainment, etc. This way this theory it makes it easy for you to identify your preferences.

History of uses and gratifications theory

In 1954, Wilbur Schramm came up with an amazing formula that developed this theory further. This theory helps you to learn how much gratification you can expect from a person to get out from a certain media. It also makes you aware of how much efforts you have to make to get it.

In 1970, Abraham Maslow also added Uses and gratification in his hierarchy of needs. He pointed that USG is an extension of needs.

In 1969, a study happened on the UK election. Jay Blumler and Denis McQuail conducted it. Through this research, they tried to find out the why people watch certain political shows on TV.

In 1972, Jay Blumler, Joseph Brown and Denis Mcquail said that there are four uses of media:

These three researchers formed a team with three more colleagues in 1973-74. Their focus was on to find out how people view mass media.

It is the stage where researchers are studying the uses and gratification theory in the modern times. This theory helps you to learn about your connection with the technology today. Research on the mobile phone has shown that you get many gratifications from the phone. These are as follows:

Uses and gratification theory researchers are also exploring the animated news and entertainment. Their motive is to learn the role media technologies play to attract the attention of the people.

Here we will sum up this article. Hope you found it helpful. If you want to learn about the primary socialisation, then you can check out our blog for the same.