Do you find your mouth zipped when your professor asks what is a pressure group? If yes, then don’t worry lots of students find themselves in the same situation while facing this question. However, it does not mean that you don’t need to learn about it.

To get desirable grades in the academics, you need to have an accurate idea of the pressure groups. So, let’s get the complete idea about the UK pressure groups through this write-up.

Pressure definition or what are pressure groups?

You may have seen some people campaigning against the government or some other unethical things. They are pressure groups. In technical words, PGs are the organisations that raise voice to seek changes in the laws or rules. They also campaign against injustice and wrongs of the society. The influence of these organisations is strong on the public opinion and voting behavior.

This way pressure groups help you to play a role in the democracy without having a connection with a political party. These groups key factors of the democracy because:

In the previous section, we gave you the definition of pressure groups. Now is the time to discuss its types. There are four types of PGs, let’s get the exact idea of the same here. 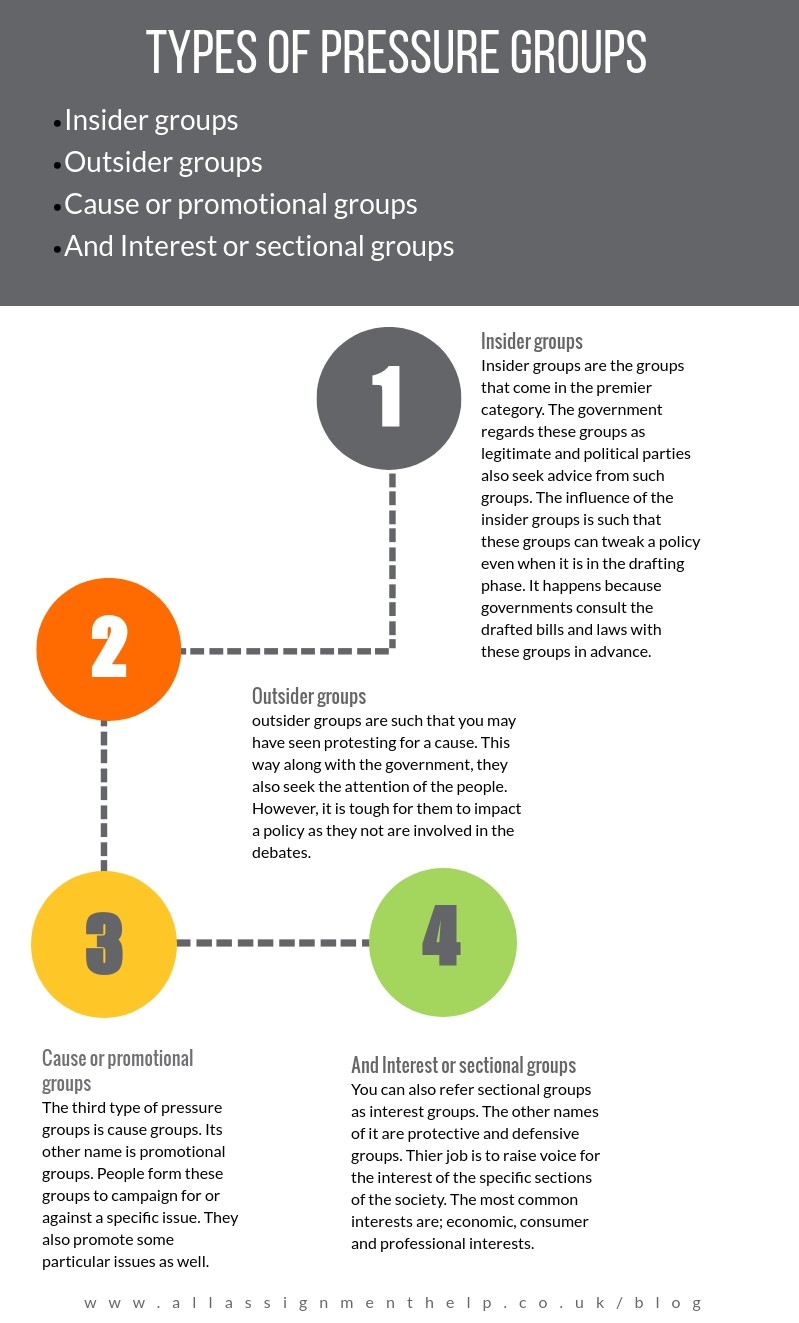 As the title suggests, outsider groups are the opposite of an insider groups. These groups do not have a close connection with the government or decision makers. This way they may not get things done as per their wishes.

In other words, outsider groups are such that you may have seen protesting for a cause. This way along with the government, they also seek the attention of the people. However, it is tough for them to impact a policy as they not are involved in the debates. CND, Motor Cycle Action Group and many other animal welfare protest groups, etc. are the outsider groups.

Cause or promotional groups

The third type of pressure groups is cause groups. Its other name is promotional groups. People form these groups to campaign for or against a specific issue. They also promote some particular issues as well. So, these are the only functions they do as PGs. The examples of cause groups are CND, ASH, shelter, Greenpeace and Friends of the earth, etc.

And Interest or sectional groups

You can also refer sectional groups as interest groups. The other names of it are protective and defensive groups. Thier job is to raise voice for the interest of the specific sections of the society. The most common interests are; economic, consumer and professional interests. Some of the examples of interest groups are CBI, trade unions and the consumers’ association.

Characteristics of the pressure groups

Functions of the pressure groups

What are the functions of the pressure groups? How are they helpful for the society? You may have such questions in mind. So, let’s discuss the same in this section.

PGs get the people involved

The major function of these groups is that encourage the people to do discussion and debate on a topic. They make the people aware of key issues and involve the public to discuss it. PGs can help the individuals and groups to speak about their issues with the whole public.

It is evident that you may not have an idea of the all the issues of the society. Pressure groups educate you about such issues. They have a better understanding of the issues as they have a connection with it. These groups also have some experts on board. Hence, you can gain good knowledge about specific things from them.

Pressure groups encourage you to participate

Political parties take the movements of the PGs seriously. It is because these groups have a better understanding of the issues. They are also aware of how government works and what may affect its functioning. This way pressure groups spread the awareness of the same among the people. They help you to participate in fighting for a cause.

PGs raise their voice for the issues that political parties don’t want to touch because those are highly sensitive. For example, the issues related to LGBT, ban on alcohol and smoking, etc.

You may have seen some groups helping the people who have lost their dear ones in the war or some other mishappening. This way these groups help the people to cure their pain.

Pressure groups are very influential. They can make changes happening in the public policy. These groups also promote decentralisation of power within the government.

What techniques to pressure groups use to achieve their objectives?

You see pressure groups doing protest and campaigns, etc. All of these are the techniques that PGs use to reach their aims. Let’s get a precise idea of the same here:

Protest and demonstrations are some of the oldest methods that these groups use. These are effective methods and have even resulted in the dismissal of many governments.

As discussed above, PGs have a strong connection with the government. It helps them to do lobbying with the government and parliament. They persuade public officials to make changes in the policies as per the public and their personal needs.

It is the method that an insider group uses to meet its objectives. It is because they have contacts with the political parties. They pressurise the opposition party to reach its aim.

Pressure groups are aware of the ways to get what they want. They have experts in their teams and have far more knowledge about a thing than the government officials. One route that PGs take to fulfil their objectives is to take legal action. Their advocates have fine knowledge and can handle a case well in the court. Moreover, these groups can also take direct action route to reach their goals. That is civil disobedience.

In the recent times, lots of revolution have started on the social media. Pressure groups use social media to mobilise the mass. Recent revolution of Egypt is the example of it.

Hope this article gave you some idea of the pressure groups and many other things about it. If you some suggestions to improve this article, you can share it in the comments. You can also bookmark our blog if you wish to read same types of articles.