In the last few years or so, English has emerged as one of the most speaking language in the world. It is being used at every platform as well as industry from business to sports. As English is one of the most preferred language of the world, it is our responsibility to use it the right way. 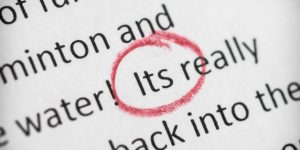 However, it is not happening the same way and people are increasingly using many words wrong way. It has led to people getting misinformed about the words and the quality of English is getting married.

As a student, you may be doing the same as well, but may not have realized it yet. However, as an online assignment help provider, we understand our duty and have come up with some words that are often misused. So, read on to find those words and understand their right usage.

It is the word that you use much often in daily life. It is a vivid word that not only helps you convey something but it also enhance the quality of whats being said or written.

However, it has been seen that many people are not using it the right way. According to the experts, the actual meaning of unique is something that is only one of its kind or unparalleled. But, people use it for something that is unusual or extraordinary and use words like very, rather and quite with it, which is totally incorrect.

You must have heard some individual saying something “wow, thats ironic.” It is the word that sounds cool and as a result people have started to overuse it. They use ironic for anything that is an amusing coincidence.

However, if you look at the actual meaning of this word, it means something happening that you did not expected. So, you should make sure to use it according to its meaning.

Although this word is not the one that ranks high in the list of commonly misused words of English, but it holds some place in the list.

It is the word that is used for something like offensively flattering or insincere. But people are using it to praise something, which is totally unhealthy trend for English.

In the modern times, you must have noticed that the words like really or actually seem outdated. People are increasingly using literally in place of both of these words to emphasize a point.

But, as a student, it is your duty to learn the right usage of the word so that you can spread what is right. Literally means something that is in a literal manner like word for word.

Enormity is the word that people get confused with much often and end up using it for something that is enormous.

However, as per the experts, enormity is the word that should be used to describe outrageousness or excessive wickedness.

So, it was a small effort from us to tell you about some words that are often misused in English. Hope it was helpful.

If you have some problem in writing an academic assignment, then you can opt for our assignment help and can get a best quality assignment.