Hey guys. In my last article, I talked about Thematic Analysis. In this article, I will brief you on Factor Analysis. An analysis is an important part of any project or business. So, I wanted to tell you about such analysis.

This article will deal with the following:

Let’s get started with the concept of Factor analysis.

1)What is factor analysis?

Factor Analysis is a helpful technique which is used for investigating variable relationships for tough concepts like dietary patterns, socioeconomic status or psychological scales.

It permits researchers to see through concepts that are not easy to measure, just by mixing a massive number of variables into a few accountable underlying factors.

Factor Analysis is a type of analysis which is used to scale down a large number of variables into fewer numbers of factors. In this process maximum common variance is extracted from all variables and then they are put into a common score. Factor analysis comes under general linear model(GLM).

This method has different assumptions like- there is no multicollinearity, there is a linear relationship, it includes relevant variables into analysis and variables, and factors are correlated. Many methods are there, but the principal component analysis is mostly used.

Factor analysis lessens the information inside a model by lessening the dimensions of the observations. There is a lot to explore in Factor Analysis. It does not differentiate between dependent and independent variables.

2)Why do we use factor Analysis?

Factor analysis has many useful benefits. Following is the list which will tell you that why we use factor analysis:

3) What is a factor? & What are factor loadings?

i. What is a factor?

The central concept behind factor analysis is that multiple observed variables have a sort of the same pattern of response as they are all related to a latent variable. They are not measured directly. These latent variables are called as factors.

In each factor analysis, there is an equal number of factors as there are variables. Each factor holds a certain amount of the total change in the observed variables. The factors are listed down as per the variation they explain.

The eigenvalue is the way to find out that how much of the change of the observed variables (factors) explains. A factor with an eigenvalue greater than or equal to one, explains more changes than a single observed variable. The factors which explain the lesser amount of changes are rejected.

ii. What are factor loadings?

The association of each variable to the connecting factor is shown by “factor loading.” Let’s take an example of the output of a simple factor analysis.

There are different variables of the same factor A. Say, the variables are occupation, job, income and their respective factor loadings are 0.60, 0.50 and 0.40. So, the highest factor loading is with the occupation. It shows the strongest relationship with the connected factor which is A.

Factor loading is the interconnecting coefficient for the variable with its factors. It depicts the changes shown by the variables on the same factor. According to SEM approach, a thumb rule is there that factor loading of 0.7 or higher, represents that the factor takes sufficient variations from that variable. 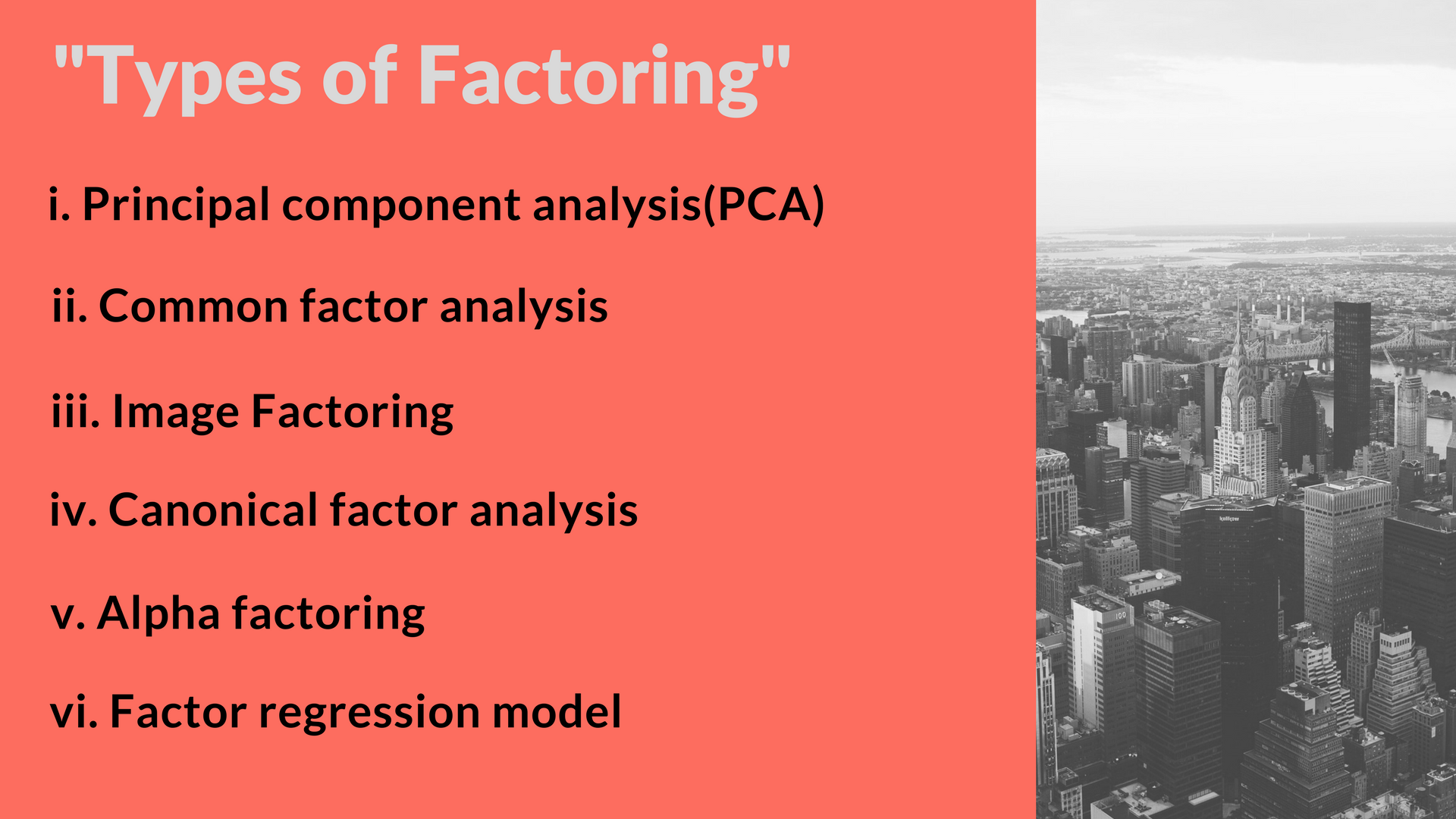 Following are the types of methods which are used to bring out the factor from the data base:

It is set on the interrelation matrix of guessed variables rather than the actual variables. Each of the variables is imagined from the others using the method of multiple regression.

It is also named as Rao’s canonical factoring. It is a bit different method of calculating the same model as Principal component analysis. This method finds out factors that have the highest canonical interrelation with the observed variables. Canonical factor analysis doesn’t get affected by the rescaling of the data.

It is based on increasing the reliability of factors and assuming that variables are randomly collected from a universe of variables. All the rest methods assume cases to be collected and variables to be fixed.

It is a combinational model of other factor models and the regression model. It can be seen as a hybrid version of models whose factors are equally known.

5) What is Factor Rotation?

Factor Rotation is the method used for the interpretation of factor matrix. For any results with two or more factors, there is a limitless number of orientations of the factors which will elaborate the data equally.

A researcher must choose a single solution from various possibilities as there is nothing like a unique solution.The process of factor rotation rotates the factors in multidimensional space to solve with the best-simplified structure.

There are two types of factor rotation, i.e., Orthogonal rotation and Oblique rotation. Following are the brief detail of both types:

One of the advantages of oblique rotation is that it produces results with a better and simpler structure as it allows factors to correlate. It also produces estimates of correlations within the factors.

i. What is EFA factor analysis?

EFA is the abbreviation for Exploratory factor analysis. This analysis supposes that any variable or indicator is associated with any factor. This is the most commonly used factor analysis by the researchers. EFA is not based on an initial theory.

Exploratory factor analysis (EFA) is to find out complex correlations between group items and items which are a part of merged concepts. The researchers don’t make any initial assumptions regarding the relationships among the factors.

EFA is also considered as the statistical method which is used to disclose the hidden structure of a huge set of variables. It is a technique in factor analysis whose underlying goal is to identify the hidden relationships between different measured variables.

EFA is generally used by the researchers when they develop a scale which then identifies a set of latent constructs, hiding a set of measured variables. (Note: Scale is a bunch of questions, which are used to calculate or judge a particular research topic).

Exploratory factor analysis procedures are more effective when each factor is represented by many calculated measured variables while analysis. EFA needs the researchers to take different decisions based on how to analyze as there is no one set method.

ii. What is CFA factor analysis?

Confirmatory factor analysis is a complex approach which tests that the items are connected with some specific factors.

So, guys, this was all about Factor Analysis. It is one of the best methods of analysis which is a descriptive or exploratory way and requires many subjective judgments by the one using it.

I hope you have got all your answers regarding factor analysis. If you want me to add something more to this article or, if you liked the information, then let me know through your comments below. Also, do subscribe to my Blog for more informative and fantastic articles like this one.

For any query regarding this topic or for any online assignment help, you can email us on the id given on our website. We would love to help you. Thank you for reading. 🙂